A couple of months ago I mentioned that I was thinking about a Facebook ad. Well, I've just created one. The comments on the previous post were very useful (thanks Brendan!). I've set a very small budget (£5 per day) just to test it out over the next four days. David very helpfully gave me temp admin permissions to the Students' Union page so I could target the ad at users who don't currently like the Student Development page (current "likes" 1,692) but already like the Students' Union page (current "likes" 5,163). I'll let you know how it goes. One thing I'll change for next time is the image - it doesn't render very well at a small size but I wanted to link it to our Roadshow - could probably update that now but need to get onto other things...
Posted by Stu at 11:13 2 comments:

I'm very pleased to be able to announce that we've been shortlisted for the Times Higher Education Awards Outstanding support for students. Our letter said:


"I am delighted to inform you that your institution has been shortlisted for the Times Higher Education Awards 2010 in the Outstanding student support category. This is a significant achievement given the quality and number of entries - we received more than 500 entries from more than 120 higher education institutions."

Which is great news. The nomination is for The University of Leicester Internship Programme (TULIP) that you can read more about here. Frances Capps, our Student Employment Services Manager, runs the programme, which was the brain child of Paul Jackson, the Director of Student Support and Development Service.

Part way through a busy ALTC conference I'm just trying to jot down a few of my thoughts on things so far (largely for my own benefit rather than anyone elses).

Yesterday was a bit of a slow start. Donald Clark's keynote was, I felt, provocative but lacking in any substance or evidence. Mostly I'll remember him for not having a lot to say that was constructive and swearing a lot. It got better after that. Geoff Stead's mobile learning demonstration was well done and it was good to meet him today. Alan Cann's session I missed because I had to leave early but his innovative use of FriendFeed to scaffold reflection is well worth a look at the slides. Our (that's Alex, Mark, Jen and me) presenation on Creating pedagogic models around  searchable tags andfreader commentaries on e-texts was well received (well done Alex!) - you can see the slides (actually, Prezi) on my previous post.

The sessions I've been totoday have been great for different reasons. The panel discussion on ethics of web 2.0 was extremely thought proving - gave me a lot to think about. The Guerilla narratives of media workshop was a lot of fun - in less than 30 minutes we generated usable ideas for using mobile devices for learning. And Dave White pulled off a brilliant presenation (that's two years in a row) on models of online distance learning - I'll blog about it more when I've had chance to digest it and hopefully post a link to the talk.

And as always it's been great to meet some new people, especially those I've only ever 'met' before on Twitter, and also bump into some old people too.

And finally, just to prove that I'm really here, here's an image of me with my apple devices in the conference from Steve Wheeler's blog post of yesterday. Thanks Steve! 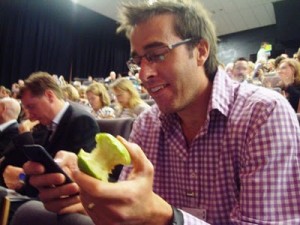 This presentation is Alex and Jen's work, but I'm putting it here for completeness, and because Mark and I are the other two members of the project team. We're presenting it at ALTC tomorrow (although as I'm setting this post as a delayed publication - that should read 'today').