On Friday afternoon I hosted a celebration event for The University of Leicester Internship Programme, otherwise known as TULIP (you remember, the one we got shortlisted for a Times Higher Award for). When putting together some slides quickly on the morning I thought it would be good to have a twitter hashtag feed as part of the presentation. I posted a tweet asking if anyone knew if I could add a twitter feed to a Google presentation. Then I thought about it the other way around and asked if a Google presentation could be embedded in Twitterfall. This would be easier if I just storify-ied it.

So the clever (and simple) way to do it was as per Matt's suggestion of using a Google site. I just used the default theme and stripped out the navigation, then added the Google presentation and found a twitter widget (Insert > More gadgets > Featured > Search 'Twitter Widget' - it's by http://www.gstatic.com - make sure you include the 'Featured' step otherwise you get all sorts of exotic gadgets!). It took me less than 5 minutes.

So here's the google site with the live twitter feed from the #uoltulip tag (and I used <F11> to make it full screen). 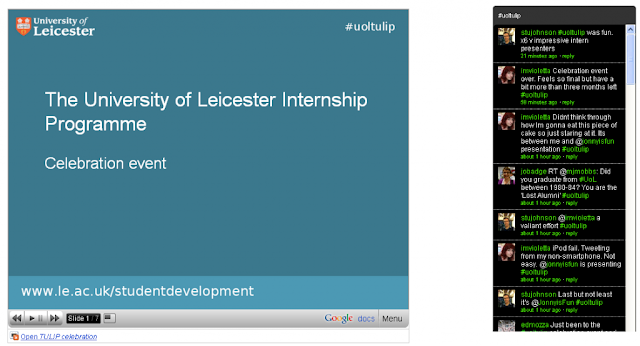 I figured that if the twitter feed was abused I could just click on the button to open the presentation full screen, but this wasn't needed, partly due to the specificity of the hashtag and partly due to the fact that Twitter is much better at blocking spammers than it was a few years ago.
Posted by Stu at 10:00