It's been just over a week since I sent my first MailChimp email to our distribution list of nearly 3,500. I blogged about it briefly but now that a week past since I sent it the report looks a bit more interesting.

Of the 3,456 messages sent 858 were opened, 136 bounced and 2,462 were unopened. To be honest I'm a bit disappointed about these figures - but they're pretty close to the industry average (apparently) and previously we didn't have any data on who had opened what so I'm going to use this as a base line. 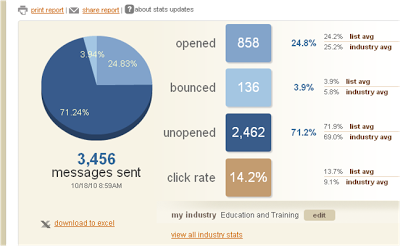 What I'm more pleased about is the click rate.; 473 of the 848 who opened it clicked on a link - which suggest there was something of interest in it. 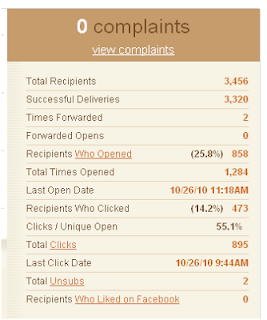 MailChimp even gives me a 'Click map' so I can see which links recipients clicked on. Very useful. 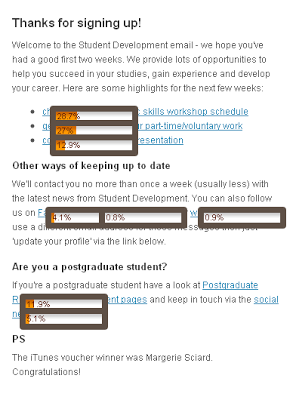 I also know from the report that the 848 people opened it a total of 1,285 times. 1,202 of the opens were from the UK, 47 from China, 4 from India and various single opens from other places. 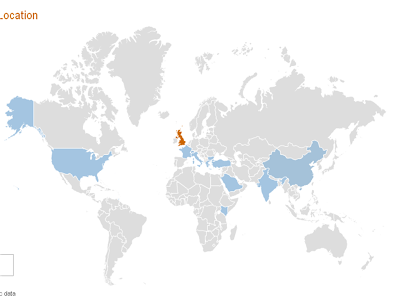 Also, only 2 people unsubscribed. Which is good.

Now I need to decide what to do with all this lovely data. I've also figured out how to create subgroups within the list so we can differentiate on the basis of year of study (assuming people are happy to tell us this information). More on this later...
Posted by Stu at 13:24 No comments: 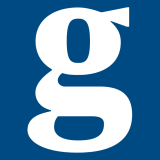 I just saw on a retweet from Richard Hall that The Guardian have just released some social media guidelines for its journalists. You can read them in full here but the main points are:
Which seems like very good guidance to me.
Posted by Stu at 13:27 No comments:

Having been quite pleased with myself a year ago for figuring out how to automate events notification from our website to Facebook and Twitter I've decided to turn it off. News items will continue to push out automatically but Vic, James and I decided that the events notification was just too noisy. Vic is now taking more of a specific responsibility for updating our Facebook and Twitter accounts and it's a much better tone and timing than the automatic events feed (see this for an example). James is beginning to do the same for the postgraduate researcher development accounts. Would be interested to hear what you think...

Got in this morning to a confirmation email that my first MailChimp mail had been delivered. See below. 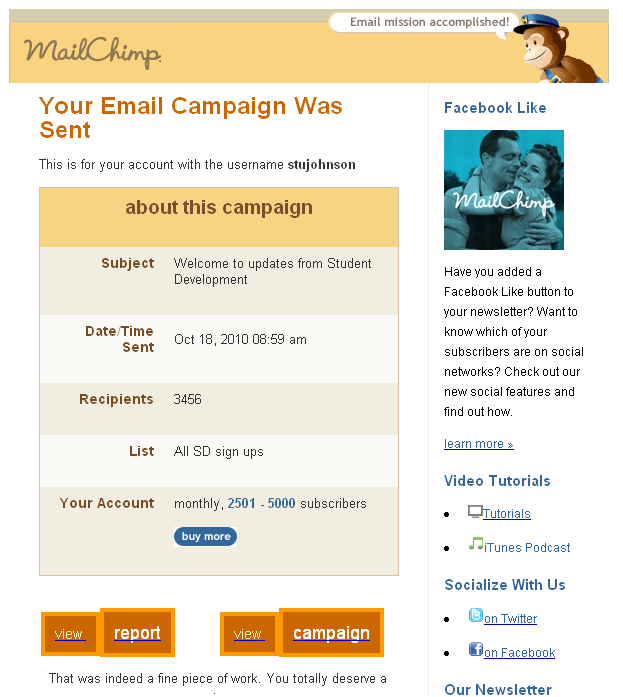 The reason there were 3,456 on the list rather than more than 3,500 (the figure I mentioned last week) is because when you upload a list the very clever little chimp notices duplicates. It also notices syntax errors so I was able to alter an address which was to @g,mail.com and and one which was @hotmail.,com. Very clever.

Now I need to wait and then check out the reports when more data has arrived. The report about 20 minutes after the delivery said as follows...

I’ve taken the plunge with MailChimp 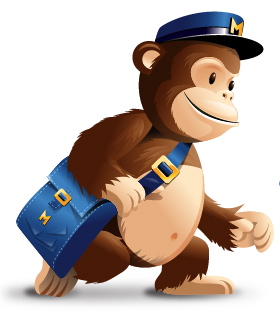 Having mulled it over for a couple of days I've taken the plunge and become a fully paid up member of MailChimp. Having had more than 3,500 students sign up to our mailing list (yup, it surprised me too) I came to the conclusion that we couldn't manage such large numbers on an internal system. Doubtless I'll blog more about MailChimp when I've had more time to have test it, but just for now there are two features in particular that were clinchers for me.
I thought I'd spotted a catch last night when I said thought they tied users in by not letting you export contact lists. I tweeted the thought and within two minutes I had a reply from MailChimp telling that I could export lists and with a link to the place telling me how. I was very impressed.

What I'm most concerned about now is what to say. Here's a link to a browser based draft and there's a screen shot of it below. If you have any comments on any aspect of the email (content, tone, style) then I'd be really grateful to hear them. I plan to send it tomorrow afternoon. Or maybe I should wait until Monday morning? 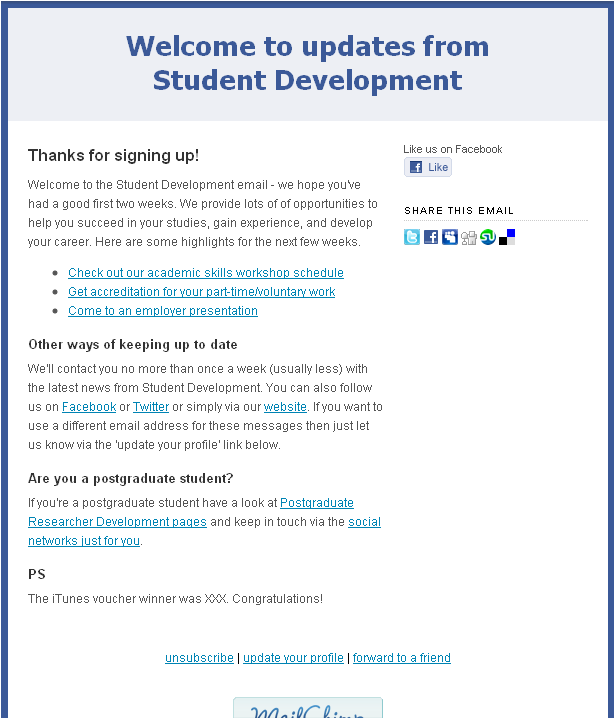 An update on the Good old fashioned email post - I've now had more than 3,000 people sign up to our mailing list. With that many people on the list I need a mailing list manager. Obviously I'd like to push more of them to our Facebook and Twitter accounts but as Marta said in the comments 'I guess we have to give them what they've signed up to'. They've asked for email. What I want to avoid though is having to reply to lots of emails - so we'll just use it as a channel to push information out - which is why I'd prefer it if they used social media because then the communication can be much more responsive. We can quickly reply to a tweet or a Facebook post and the one-to-many nature of social media means that everybody else can benefit from the answer. With email it's one-to-one and there's no way we're spending time responding to 3,000 questions, many of them probably similar.

So, does anyone know anything about mailing list managers? I think I need to learn about them quickly. We can't use our University CFS system for mailing to such large numbers easily because there's a limit of 1,000 people per email. Also, if we're going to use email then I want people to be able to unsubscribe easily should they want to, again, there's no easy way of doing this with CFS. A good mailing list manager should also give us several other useful features, including easy delivery, tracking and groups that support preferences.

I've heard of MailChimp and it looks good but we'd need to pay for it ($50 a month) because the free accounts are only for up to 1,000 addresses. It also has the potential to integrate with Facebook and Twitter.

Becka told me that they use Majordomo at Bradford. It describes itself as "a program which automates the management of Internet mailing lists. Commands are sent to Majordomo via electronic mail to handle all aspects of list maintenance. "

I'm desperately in need of some advice from this from people who have used such things...
Posted by Stu at 12:06 4 comments:

I've thought a lot about how we publicise our services in the last 12 months (for instance a couple of posts tagged publicity and all the Facebook stuff). I've thought about our website, social media, digital signage, email newsletters and print. All with a view to engaging students in what we do. More recently we've summarised our diverse range of services in some simple statements (I blogged about the first draft of those here), which have helped both staff as well as students understand more what we do and how it fits together. They're as follows:
Incrementally we are getting more engagement, evidenced in part by the number of 'Likes' on our Facebook page (but I'm trying to get beyond likes). We've also been running a Student Development roadshow this week to get out and about on campus to tell students (and possibly staff) about what we do. In spite of all this activity I was still suspicious when I got in this morning to find more 1,800 emails in my roadshow signup subfolder. I asked on Twitter if anyone knew why it might be (I'd suspected David might have popped something up on the Students' Union Facebook page) but in the end I found out it was via a good old fashioned email from Paul Jackson, our Director (see below). It went to all students and we now have more than 2,300 responses since 17:46 yesterday (more than 500 of which were since having made the form University of Leicester login only).

So I've been musing about why this worked so well. I think there are a number of factors:
Now I need to do make sure that we capitalise on this initial interest. I also need to think about how to manage such big numbers. I'm certainly going to encourage people towards our Facebook and Twitter accounts, but maybe students just like good old fashioned email. I thought that was for old people.
Posted by Stu at 16:30 7 comments:

The difference being the addition of the 'who are at University of Leicester' bit. I shyed away from this the first time in case people hadn't updated their profiles - but I'll give it a go and see what happens, especially as we're now in freshers' week more people should have updated their profiles by now. I really should put up another add with different criteria (as per Brendan's helpful comments to a previous post) but I want to see how this one goes. I'm only spending a poultry £5 per day but I still need to be careful what we spend on it whilst it's still very much experimental. I also asked David if he'd mention us on the Students' Union pages - which may well be more effective. And now I understand the 'Action' column in the stats summary table (thanks Alun) I should be able to differentiate between those who 'Like' us as a result of the ad and those who find us via other means (like a post David might put up). But the important thing in all of this is not the numbers but getting beyond likes. So more work to do...
Posted by Stu at 11:32 No comments:

This needs to be quick as I'm in a hurry. Hopefully a more considered most will follow next week. So I mentioned on Tuesday that I'd put up my first Facebook ad. It was just a simple test with a very small budget of £20 - set to run over 4 days - 28 September to 1 October. The targeting was as follows:

On Tuesday before the ad we had 1,692 'Likes'. 4 days later we now have 1,728, an increase of 36. It's not a huge increase but it's something - and all in the week before term starts. You can see further details in the image below.

I need to go through the figures more closely (and look up the helps to see what some of the TLAs mean) but there have been 63 clicks but how many of those are responsible for the increase in 36 Likes I'm not sure. The ad performance glossary doesn't mention what the 'Actions' Column means - if the actions represent the number of clicks that translated to likes then the ad is responsible for less than a third of the increase in the four day period. Does anyone know what the Actions column means?

Anyway, I think I'll pop another one up for next week (but I'm going to try a different image) to see what impact that has. It's useful to be able to experiment...
Posted by Stu at 17:03 2 comments: