Trying to get beyond 'Likes' 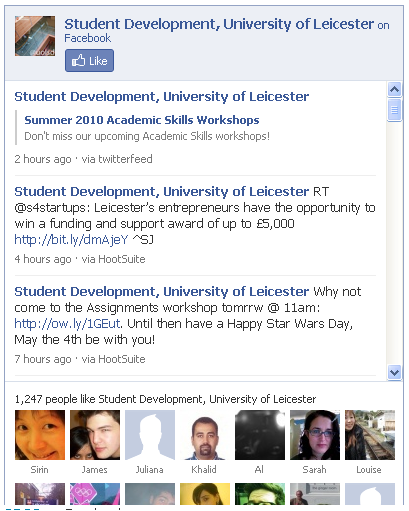 I've had two meetings recently where I've been able to glean some useful advice regarding Student Development's use of Facebook. The first was with David Morgan a couple of Friday's ago (after which I shared his really helpful social media guidelines) and the second with Alan Cann and Jennifer Jones last Friday. The meetings were different but the outcomes the same - a recognition that I need to encourage more interaction on our Student Development Facebook page.

I've been really pleased with the steady increase in the number of people who 'like' (Facebook's new language for what were page 'fans') our Facebook page but we need to do more with it. Currently the page updates are either automated via RSS feeds from our website or published manually by our Helpdesk via Hootsuite. This has provided a good foundation for the page but I'd like to begin to do more. Our Students' Union use their Facebook page really well and get a lot of engagement through it as a result. Three noteworthy differences in the set up of the pages are:
In terms of the content they post the Students Union are very creative (in many ways more so than we could ever be) but they aren't just being creative for the sake of it, they are doing it to encourage interaction. To borrow again from David's social media guidelines they:
So, I've decided to experiment with a bit of a push on revision and exam skills next week sometime. Currently we tend to just push links to relevant study guides but I think we need to do more to engage people so I'm thinking of the following:
That doesn't look like much of a plan. What do you suggest?
Posted by Stu at 10:05